Baby Falak: Gruesome story of an innocent life which ended! 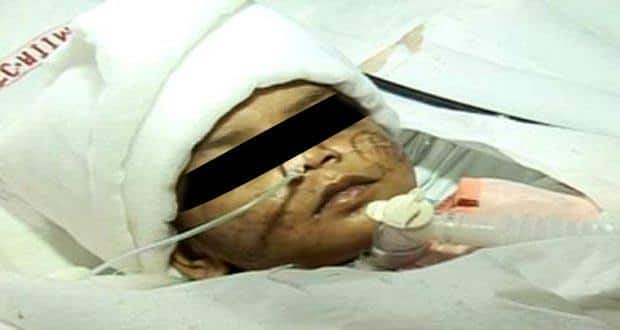 After battling for her life for sixty days, baby Falak was declared dead at 9:40. "The baby died of cardiac arrest. She suffered cardiac arrest at 9 p.m. and was declared dead at 9.40 p.m," Deepak Agrawal, assistant professor neurosurgery at AIIMS, told IANS. AIIMS Trauma Centre chief M.C. Misra said the baby had fluctuations in her heart rate since morning. "We tried to revive when she had the attack at 9 p.m. but sadly we couldn't," he told IANS.

The toddler had been battling for survival at AIIMS since she was admitted with a fractured skull, bruises and human bite marks all over her body. Falak had undergone five critical surgeries. Baby Falak's 60 day battle for her life exhibited both the brutality of human nature that put her in such a critical condition and the never-say-die quality of human spirit,including the doctors and medical team of AIIMS which kept on fighting for what seemed a very lost cause. This is a timeline of events that occurred after Jan 18 when a battered unconscious Falak was brought to AIIMS.

Jan 26: Docs say she is showing signs of recovery although she is still on a ventilator and in a coma.

Jan 30: Dubbed 'baby Falak' by the media, the child undergoes another brain surgery. Docs keep her on antibiotics to combat brain and chest infections.

Feb 1: Baby Falak is diagnosed with blood infections. Brain infection makes her chances of survival bleak but all her vital organs are functioning properly.

Feb 3: Taken off the ventilator, she shows signs of improvement. Pus accumulated in her brain is removed via a needle and she is being fed through a tube.

Feb 5: Baby Falak back on the ventilator again because she developed breathing problems. Administered strong antibiotics, docs say another surgery on the cards if her infections worsen.

Feb 7: Baby Falak put on the ventilator for a while. Docs say chances of her remaining vegetative were 30%. To enhance her nutrition level, docs administer enteral nutrition (method of nutrient solutions fed into gastrointestinal tract through a tube), so that her body fights infection. Docs say it's vital to strengthen her immune system.

Feb 11: She is taken off the ventilator. Docs wait for brain infection to subside following which they will perform a 'shunt', where they will insert a plastic tube from the stomach to the brain to drain out the brain fluid.

Feb 20: A fifth surgery is performed on baby Falak connecting her abdomen to her brain. This is to reduce the excess water from her brain which under normal circumstances should have been circulating throughout her body.

Feb 22: Docs say Falak coping well after 'shunt' surgery which removes excess water from her brain. They want to take her off the ventilator as chances of respiratory associated pneumonia increases when the child is on ventilator.

Feb 29: Docs stop administering antibiotics and take her off the ventilator. They say she has shown signs of improvement and was responding well to treatment.

March 9: Over 50 days after baby Falak was brought to the hospital, docs claim she is doing well and could even be discharged in a week. The doctors performed five surgeries on her, though it remains uncertain whether she'll remain in a vegetative state or not

The police had arrested 10 people involved in the case including the key accused - Rajkumar Gupta, the man alleged to have handed over Falak to his 14-year-old girlfriend who brought the baby to the hospital claiming to be her mother. Another woman named Pratima has also been arrested in the case. She was part of the human trafficking racket that exploited Rajkumar's teenaged girlfriend.

Pratima had got Falak from Laxmi and given the child to Rajkumar who in turn handed her over to the teenaged girl whom he allegedly sexually abused. Laxmi, who is also under arrest, had befriended Munni - Falak's biological mother and persuaded her to leave her abusive husband and re-marry. She had arranged for a second husband for the 22-year-old Munni, and also kept her three children including Falak with herself and subsequently gave them away.

Do we care for the hundreds of other Falaks?