Akhil Mehta, admin of @aapChutiyeHain, passes away. Could depression have been the cause?

One more life crushed under the heavy cloud of depression. Akhil Mehta, founder and one of the admins of the twitter handle #aapChutiyeHain, died, allegedly due to depression, as claimed by his friends. The handle, as described by the author was to achieve 'World peace through Insult Comedy. Proud Indian.' According to reports, he committed suicide in Tronica city on 28th March, 2015. The Facebook page states that Ahkil Mehta has died and put up a condolence message to that effect.

Akhil was missing from 27th March. He was last reported to be in the capital city, Delhi. Following which, his friends have filed a police complaint. However, the fact that he is no more is being reported by his friends. The news is going viral on twitter. Here is one of the tweet -- 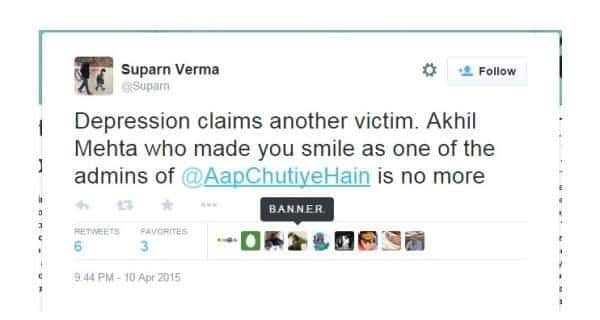 On 28th march, Ghaziabad police reported that an unidentified youth committed suicide by jumping off a 165-feet high government water tank in Tronica city. Here are 8 modern-day signs of depression you ought to know.

Is depression really taking a toll on you?

This is not the first time that depression, a mental illness, is known to be the cause of death. In India, one out of every five women and one in every 12 men are suffering from this condition. But, depression is still one of the most neglected diseases in the country. One of the common reasons being people doesn t speak up about the lows they go through, which ultimately leads them to take such a drastic step of ending their life.

Recently, Bollywood actress Deepika Padukone spoke up about her battle with depression and how she fought bravely with the condition and emerged out as a winner. One thing what most people should bear in the mind is that speaking about depression with your family, friends or closed ones is the first step to emerge stronger. There is no point in fighting the battle alone by crying or silently allowing the condition to overcome you.

With long working hours, stress and high expectations every other person is ought to suffer from depression, but how you deal with it the right time and with the right people s help is what makes you a true fighter and a winner. Here is a real life story of an editor about depression and how she fought her battle against it.