In addition to putting patients at ease, a doctor-patient relationship built on trust and empathy helps the brain beat pain and stress. Recent studies have shown that doctors who listen carefully have

In addition to putting patients at ease, a doctor-patient relationship built on trust and empathy helps the brain beat pain and stress. Recent studies have shown that doctors who listen carefully have happier patients with better health outcomes, but the underlying mechanism was unknown, said Issidoros Sarinopoulos, professor of radiology at Michigan State University. Also Read - Facial pain may be a symptom of headaches: Study

‘This is the first study that has looked at the patient-centered relationship from a neurobiological point of view,’ said Sarinopoulos, study co-author, the journal Patient Education and Counselling reports. ‘It’s important for doctors and others who advocate this type of relationship with the patient to show that there is a biological basis,’ Sarinopoulos was quoted as saying in a Michigan statement. Also Read - New pain-sensing organ discovered in skin

The study involved randomly assigning patients to one of the two types of interview with a doctor before undergoing an MRI scan. In the patient-centred approach, doctors addressed any concerns participants had about the procedure and asked open-ended questions allowing them to talk freely about their jobs. The other patients were asked only specific questions about clinical information such as their medical history and what drugs they were taking.  As expected, those who had the patient-focused interview reported greater satisfaction and confidence in their doctor in a post-interview questionnaire. Also Read - Pain in the legs? It could be a pinched nerve, blood clot or more

The participants then were placed in the MRI scanner and given a series of mild electric shocks, similar to the discomfort of having an IV needle inserted, while looking at a photo of a doctor who they were told was supervising the procedure. The scans measured activity in the anterior insula — the part of the brain that makes people aware of pain — in anticipation of the shocks and when they actually occurred. The brain scans revealed those who had the patient-centred interview showed less activity in the anterior insula when they were looking at a photo of the interviewing doctor than when the doctor in the photo was unknown.  Those participants also self-reported less pain when the photos showed the known doctor.

‘We need to do more research to understand this mechanism. But this is a good first step that puts some scientific weight behind the case for empathising with patients, getting to know them and building trust,’ he said.

The study was part of a broader effort at Michigan, led by Robert Smith, professor of medicine, to establish standards for patient-centered health care and measure its effectiveness. 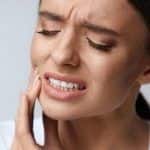 Having dental problems? 6 home remedies to get rid of the pain