New York, June 16 (ANI): 8 in 10 men say that they have always wanted to become dads or think they’d like to be one someday, a new survey suggests. Debates about the different ways women approach mo

New York, June 16 (ANI): 8 in 10 men say that they have always wanted to become dads or think they’d like to be one someday, a new survey suggests. Debates about the different ways women approach motherhood dominate news coverage about parenthood these days, with fathers’ experiences often left unexamined. As compared to men, about 7 in 10 mothers wanted to have children. 69 percent of dads called that long-standing desire to have children an important factor in their decision to have kids, the Huffington Post reported. Also Read - Man boobs can be an embarrassment: Avoid these foods and sport a manly chest

Dads were more likely than moms in the poll to say they saw positive effects from fatherhood on their love life and career, and they are just as likely as moms to say it improved their overall happiness, sense of accomplishment and sense of purpose. When weighing whether to become a parent, mothers and fathers placed similar levels of importance on where they stood in their career and the impact having kids might have on their social life, and like mothers, saw having found the right person to have a child with and the joy of having children as the most important considerations. Also Read - Vitamin D levels in blood can predict future health risks in ageing men

Men who do not have children were just as likely as women without kids to say they want them someday. Among men under age 35, 91 percent are dads already or say they think they would like to have children someday. Men were more likely than women to say the main reason they’d like to become fathers someday is to carry on traditions or family history. According to the poll, 14 percent of men called that a top reason compared with 4 percent of women. Also Read - Father’s Day 2020: 6 tips for new dads to bond with baby

Women place greater emphasis on wanting to be a parent, to care for and raise a child – 22 percent among women who want children compared with 2 percent among men.

Good looks can get you hired! 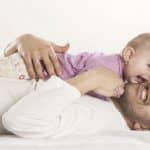