2 year old boy has a heart attack after eating peanuts! 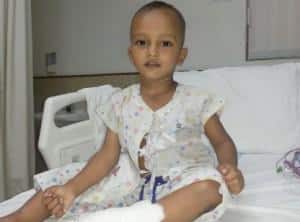 A two-year-old Mumbai boy suffered cardiac arrest after eating peanuts. Also Read - Reality Check For Indian Parents: Pushing For A SMART Kid May Be Detrimental In The Long Run

The incident happened on July 30 when Krishna Yadav had to be rushed to the Seven Hills Hospital, Andheri east, after suffering breathlessness upon eating peanuts with some friends at his home. Also Read - Proper Nutrition, Exercise Will Help Your Child Grow Into Mentally Fit Adults

A team of doctors immediately carried out tests and gave their shocking medical conclusion – the child had suffered cardiac arrest and required tertiary care. Also Read - WATCH: Are women at higher risk of death by cardiac arrest than men?

‘He was put on ventilator by the Neo-Critical Care Specialists to avoid any further complications or cardiac arrests and further tests were carried out,’ said the hospital’s consultant ENT specialist Ashwini Kumar Mehta.

Scans performed by the hospital revealed that some peanuts had got lodged in the airway of the child, creating breathing complications.

‘The pieces were blocking airflow to both the lungs and resulted in ‘hypoxia’ which is low level of oxygen supply to the brain. This led to the heart attack,’ explained Mehta.

‘After the problem was identified, the next step was to rectify it by performing a Bronchoscopy,’ said Uday Nadkarni, consultant paediatrician.

‘This procedure includes insertion of a bronchoscope into the airways, usually through the nose or mouth. Through this, pieces of peanuts were removed, allowing the child to breathe freely once again,’ Nadkarni explained.

However, Mehta assured that the child’s heart is normal and strong and there would not be any similar complications in the future.

Nadkarni said that this incident should make people more aware of the dangers of giving food to small children which are difficult to chew at certain ages, especially when their teeth are yet developing.

Nearly a fornight after the incident, Krishna’s parents – father Satyapal Yadav, working for Continuum Management Pvt. Ltd., and mother Guddidevi, a housewife – are a relieved lot.

‘Yes, he has been discharged and is now normal. This has been quite an experience for all of us,’ Yadav said.