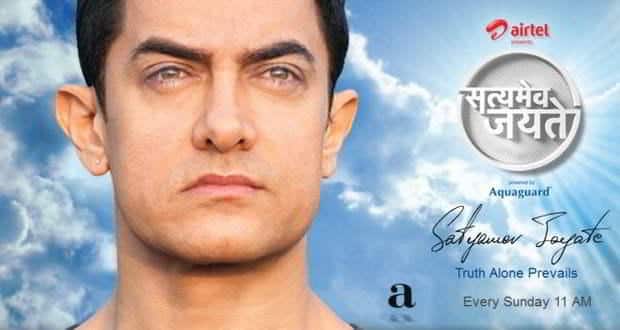 Pats and brickbats - Aamir Khan was prepared for it all when he set out to discuss burning issues in his debut TV show "Satyamev Jayate". Fearless and convinced about the aim of the show, the actor-filmmaker says he is totally unapologetic about raising the issue of malpractices in the medical profession, thereby upsetting an umbrella body of 21 medical institutions.

"I have absolutely no intentions of apologising because I have not done anything wrong," Aamir told IANS in an exclusive interview over phone from Mumbai. After raising concerns over female foeticide, dowry and child abuse, Aamir took it upon himself to shake up viewers and awaken them to the existence of irregularities in the country's healthcare system. He brought issues like cut practices, unethical medical practices, and commission demands to the fore and presented live examples of people who could have been cured with simple medicines but were advised by doctors to undergo surgeries, robbing them of precious money. This 'exposure' has landed Aamir in the bad books of the Indian Medical Association (IMA). But he does not fret!

"We were aware that since these are issues that are core to all of us and affecting every Indian, obviously there are some people who are part of the problem, and they are not going to be happy with us because these are the ones who don't want a solution to be there. "In fact, I would have been surprised if we would not have earned brickbats. The people who are getting troubled are very likely the ones who are part of the problems," said Aamir, adding that he hasn't received any physical threats so far.

He protests against the allegation that he only highlighted the negative aspects of the medical profession on his show, to which was invited K.K. Talwar, chairman, board of governors, Medical Council of India (MCI)."I don't know whether they have seen the show because a number of times we brought out that there are many doctors who are doing great work. We gave such strong examples of positive work by doctors like Dr. Devi Shetty and Dr. Shamit Sharma," Aamir told IANS.

"A lot of doctors have written to me and said, 'Your work is fantastic and we are thank you for what you have done'. Dr. K.K.Talwar, head of the Medical Council of India, was on our show and after the show was aired, he wrote to me saying: 'I thought what you did on the show was very good.' "He said that 'I am aware that a small section of doctors is upset with you, but I want you to know that what you are doing is very important and I want you to know that MCI and I will do everything we can in our control and power to set things right'. Now that is such an important and encouraging response.

"Young medical students have written to me that this is a profession we are about to enter and we are so inspired by your show to do the right thing when we enter the profession," he added.

"I want to thank these doctors and young medical students whose messages and letters have been most encouraging" he said. Aamir says his conviction in the concept and aim of the show have left him fearless of negative reactions. "I feel what I have set out to do is extremely important and what I support is important for me and very important for society and our country. I have absolutely no hesitation in doing what I feel is right for the country. So in that, if there is a small group of people who are getting upset, it is sad, but so be it. In fact, I would request those people who are getting upset to look inward.

"I believe we are trying to make a sincere effort in first understanding issues and then shedding light on them, and we are committed to that attempt," said the 47-year-old trailblazing cinema personality.