to high levels of stress and anxiety? Try the krav maga, capoeira and kalaripayattu. These forms have impacted lives of some people to a great extent. 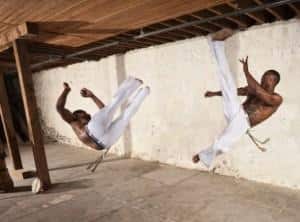 'Your mind and body are only truly at peace when the goal of physical fitness lies in reawakening your inner being. Exercise is meant to stimulate not annihilate.'

Everyone goes to the gym, does yoga, pilates, Zumba or even acrobatics but exploring alternative fitness routines is always more engaging. Krav maga Instructor Sadashiv Mogaveera, believes that city people are exposed to high levels of stress and anxiety. It's no wonder that we all want a good release of endorphins, the hormone responsible for promoting a feeling of exhilaration and blocking out any pain.' One thing that attracts people toward this Israeli art form is the ability to defend oneself, considering the rising crime rates against women,' continues Mogaveera, 'Krav maga training involves certain unique response enhancement drills, pre-emptive strikes and a barrage of rapid counter attacks leaving the attacker no opportunity to continue his attack.' Shruti Mehra, a young practitioner enjoys the combination of art forms included in Krav maga, 'It increases your awareness exponentially, it makes you a hard target for your opponents. It is easy to learn, understand and is quick to implement in a real life situation,' says Mehra, as she playfully demonstrates a move. (Read: Dial V for Venancio: Self-defence tips for women)

Capoeira, once associated with African slavery in Brazil, has now spread across the globe. It's often referred to as a game and involves intricate, graceful and complex dance movements. The traditional musical instruments are considered to be an integral element. It sets the speed, style and aggressiveness of capoeira. 'It's unlike any other martial art form, it incorporates music, dance and culture at the same time it chooses to refrain from non violence, but enables an individual to defend themselves if need be,' says Reza Massah, fondly called Baba, a capoeira instructor who was instrumental in spreading the martial art form in India. Baba chose to quit his job as a restaraunteur in Israel when he found his calling in capoeira, 'It was something I was looking for all my life. I got a six pack by default and made friends with people all over the world!'says Baba laughing. He now teaches people of all age groups, including orphanages and schools. 'Music, dance and defence! Capoiera has changed my life for the better. It's an incredible way to escape daily life stressors,' says capoiera practitioner Pooja Mistry. (Read: Self-defence tips and tricks to protect yourself)

Vipin Kazhipurath's journey to being a kalaripayattu instructor in Mumbai began in Kerala at an early age. 'I started learning when I was seven. It is a rare combination of martial training, physical culture, self defence practise and is therapeutic at the same time,' says Kazhipurath. 'It's a martial art form that is several centuries old! People, for instance actors are doing it for their professional growth, it helps with the posture, expressions and body language.' The interesting aspect about being a kalaripayattu practitioner is that it tames the individuals inner anger, creating a feeling of peace and calm mentally. In addition to this, the powerful leg swings, swift jumps and kicks exhibit the intense energy and extreme physicality of its practitioners. 24-year-old Shiela Singh is full of praise for the health benefits she has experienced, 'The philosophy of this intense martial art stretches the limits of the human body, one is able to achieve perfect neuromuscular coordination,' says Singh.

Erratum: An older version of the article said that Krav Maga was an Italian martial art form instead of Israeli. We're sorry for the mistake.