Home / Fitness / The ultimate guide to gain weight and bulk up!

The ultimate guide to gain weight and bulk up!

Find out everything you need to know about gaining weight the right way with this mega guide. 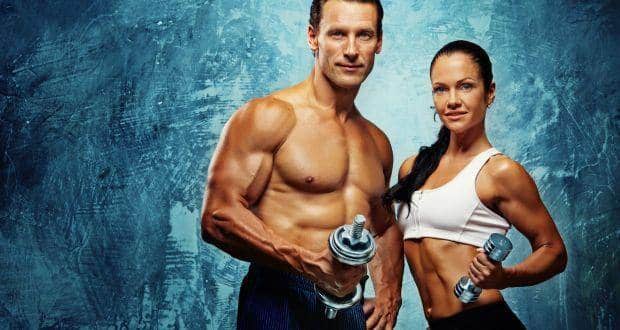 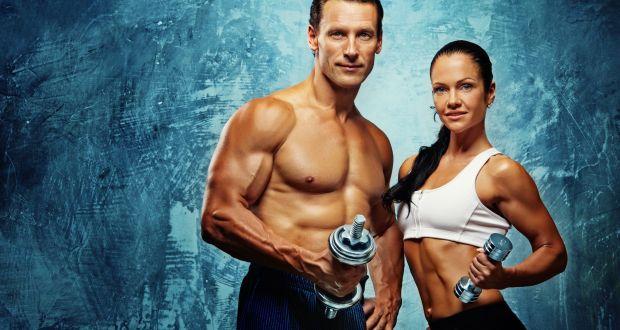 Most of us worry about losing weight and want to be thin. But there are some people who actually want to gain weight. While, it can be a challenge for most, weight gain can be achieved with proper exercise and diet. In this mega guide, we give you all the information you need to leave your skinny self behind. Also Read - 5 best dumbbell workouts for men to try at home amidst the lockdown

Diet tips to gain weight Also Read - World Milk Day: Here is why it is important for your health

Weight gain is not as easy as eating whatever your heart desires. Our expert, Neha Chandna, a leading nutritionist, says that eating right is the healthiest way to gain weight. Here are some tips from her: Also Read - All you need to know about the benefits of resistance training

Here is a sample diet plan that you can use: 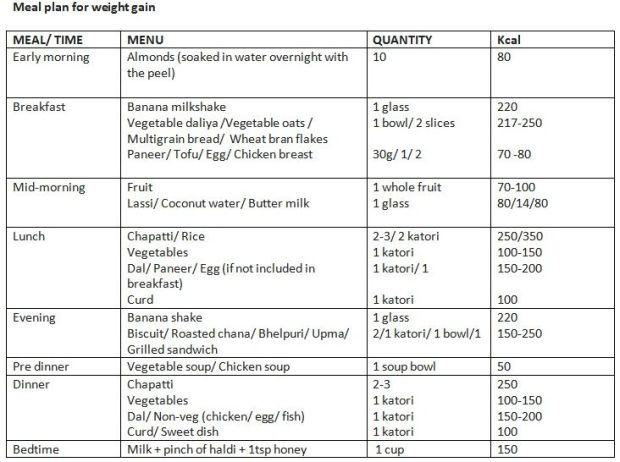 Even the skinniest of people can put on some respectable mass if they work out right. Here are some tips on how you can do that:

You’ve seen those hulks at the gym and are tempted to try that chest workout they are using. Stop. You should know what works for somebody on steroids doesn’t work for somebody who wants to be natural. Many hard gainers think more is better and end up doing an insane amount of sets and reps. They’ll often be in the gym for two or three hours. Instead, spending only 45 minutes to an hour with the weights and no more than two to three weight workouts a week.

To get bigger, go basic

Get rid of the so-called ‘shaping exercises’ done with little dumbbells — such as shoulder raises, chest flyes and concentration curls — as these target only part of a muscle group. Instead, stick with barbell-type moves and heavier weights, and aim for compound movements that involve at least two or more muscle groups, such as the chest, shoulders and triceps for the bench press. Why? Your muscles respond most to lifting heavier loads, and the impact on the muscles can be considerably magnified by moves that involve more muscle groups. This will enable you to lift even heavier weights and build more muscle thanks to those bigger loads. Go for the bigger exercises like squats, presses, deadlifts, chin-ups and straight bar curls.

To maximise your gains, choose challenging moves and go hard during every set. Intensity is much more important to muscle growth than quantity. It is better you do two very intense sets to failure (until you can’t lift anymore) with heavy weights and with forced reps (four to eight) than four to five sets of 12 to 15 reps at moderate intensity. For example, if you get to 10 reps with a lot of muscle straining, then you’re going too light.

Many guys take the easy route in the weight room. They would rather do tricep press-downs than dips, or leg presses than squats, but they’re just cheating themselves of better muscle gains.

The last thing you need – after putting your muscles on the get-bigger track — is going through a long cardio session, which will only whittle down those gains. Inevitably, your body will extract the energy it needs for long cardio from your muscle tissues, no matter how fueled up you are before. Instead, further enhance the muscle-building process by adding some muscle cardio or explosive cardio – short bursts of power followed by longer bouts of rest, two to three times a week. Do eight rounds of 10 to 20 seconds of high-intensity cardio, such as wind sprints or cycle sprints, followed by 20 to 40 seconds rest.

There’s no shortcut to the beefed up version of you. Frankly, a lot of it has to do with what you routinely eat including different kinds of carbohydrates and proteins, before and after workouts and before and after sleep.

After you wake up, you want to get your muscles back into the anabolic (muscle building) state and out of the catabolic (muscle breakdown) state they fall into by morning time. Susan Kleiner, Ph.D., a registered dietitian and author of Power Eating, recommends eating protein for breakfast to avoid that latter state — and that’s why eggs are a good start to the day. If you prefer to sip rather than chew early in the day, go with a whey protein shake — which your muscles rapidly absorb — with fruit. Overall, she says that each day hard gainers must consume at least 0.73 grams of protein per pound of body weight and 2.73 or more grams of carbohydrates. In other words, if you’re 180 pounds (81 kgs) you need 131.4 grams of protein and 491.4 grams of carbohydrates per day. If you have five meals per day, that translates to 26.3 grams of protein (equivalent to about four eggs) and 98.3 grams of carbohydrates per meal. A four-ounce chicken sandwich with a side of brown rice and vegetables would be a perfectly balanced meal.

Two to three hours before the workout, down a carbohydrate-protein mixture, such as a mixed-nutrient sports bar. This will provide immediate energy and decrease the negative effects of exercise, such as damage to muscle tissue and muscle soreness.

After your workout, don’t waste any time. Within 15 to 30 minutes after setting down that last weight, take in some carbohydrates to refill your glycogen stores, build new proteins and refuel for tomorrow’s training session.

Lastly, before bed, switch out the fast-digesting whey protein for slow-digesting, time-release proteins like casein protein powder and dairy food like milk, curd, paneer. This will help keep your body in muscle-building state.

For me, four times a week of weight training with an alternate rest day in-between is a bare minimum. I guess three times for a beginner would be a good starting point with alternating an upper-lower system but I would personally advice lifting at least four days a week with a lot of overload on the muscle (lifting to your highest capacity).

Don’t fall into the overtraining/under-recovery trap

Overtraining does happen to lot of people in this day and age and it’s mostly due to not listening to your body. I have a saying that you can never ‘overtrain’ just ‘under-recover’. Under-recovery includes can be due inadequate rest, lack of sleep or poor nutrition and supplemental. What I’m saying is that unless you’re really overexerting yourself daily in the gym and not taking the appropriate rest in between, then yes you will overtrain and that can be dangerous. Overtraining/under-recovery could lead to lethargy, constant tiredness, muscle fatigue, injuries, lack of mental alertness and even a drastic drop in weight.

It’s not entirely true that heavier weights equal bigger muscles. It’s actually the rate of tension the muscle endures in the training program that will depend on muscular gains. Of course if the weight you’re using is too light then you’ll need to lift heavier to see bigger gains. One perfect program to gain muscle is my good friend Neil ‘Yoda’ Hill’s program Y3T which involves nine weeks of training of three cycles each.

Along with aforementioned tips, here are some cardinal sins:

Celebrities have done it too! Here are their stories:

While there are many celebrities who have lost a lot of weight, some have had to put it on. Here are a few celebrities whose stories will inspire you.

The actor admits he never really concentrated on getting any particular ‘look’, just on staying fit and agile.  According to the actor, the task of putting on weight and building muscle was quite daunting, but with the right changes to his diet and exercise regime it was much easier than he initially thought.

While most actors and actresses have to go very high maintenance to get that lean look this lucky guy actually dug into delicious meals to bulk up. Breakfast usually comprised of a tall glass of milk, along with omelettes and toast. Lunch would consist of a generous helping of his favourite daal chaval along with chicken. The chicken the actor claims was essential to get the physique. Dinner was usually light, and most times is just a glass of proteins shake. As for his work outs the actorconcentrated on hitting the gym six days a week and made sure that he concentrated on the ‘show muscles ‘- his shoulders, arms and chest – throughout his schedule.

Playing Thor was not all about building muscle and looking big for Chris Hemsworth. He had to be flexible enough to swing his hammer Mjolnir and look menacing too. To do this, he practised boxing and Muay Thai which wasn’t something new for him. However, all the muscle that he put on for the role involved a lot of weight training. And, it wasn’t something the Australian actor was used to. He was into surfing and other sports which kept him fit. In an interview with AskMen, he said, ‘Early on, when my name first came up for the part, I read the blogs and comments of fans saying, ‘He’s too skinny. He’ll never be able to do it.’ That provided the motivation to get into the gym and prove them wrong. In fact, preparing for the role was harder work than the shoot itself. [The routine] was nothing fancy. It was a lot of old-fashioned bodybuilding and force-fed nutrition. We used a lot of pulling exercises, and Kenneth set up a wood-chopping area for me to prepare. Those were important to wield the hammer correctly. We would also add yoga work for flexibility.’

For the movie Force, John needed to gain weight and bulk up and he did this by completely changing his regime to load up on proteins and carbs and piled on an extra 10 kg of muscle which he lost after the movie.

The actor believes that anyone can get in shape if they think clearly and follow a disciplined schedule. Fitness, the actor quips, is like a tripod stand. ‘It has three legs – good food, good sleep and good routine. Without that you’re not really up to speed.’ 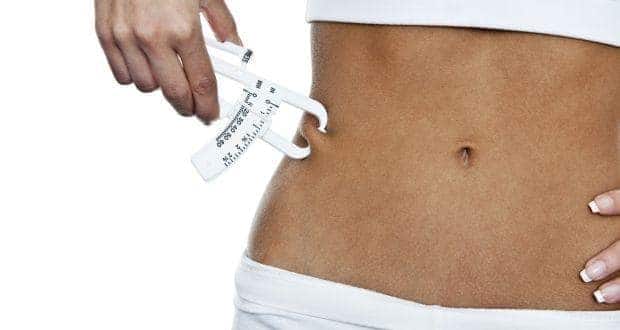 What is Body Fat Percentage? 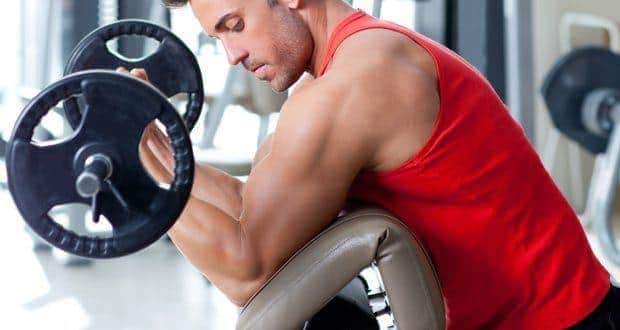 Get bigger biceps with preacher curls 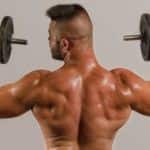 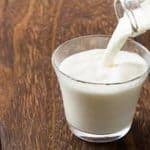 World Milk Day: Here is why it is important for your health 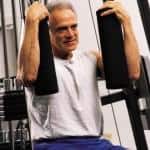 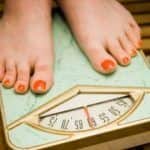 5 foods to include in your diet to gain weight healthily 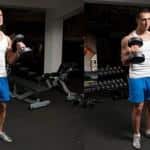