Sushant worked quite hard to tone his body and the results are evident in all his movies. 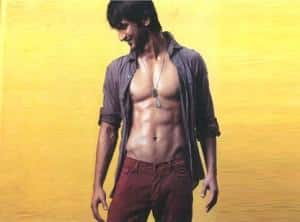 He broke the myth that TV actors cannot make it big in Bollywood with his debut film Kai Po Che and how! He swept us off our feet with his hidden dancing abilities that came in the limelight on the dance reality show Jhalak Dihkla Jaa. And he certainly broke many hearts when he decided to quit his popular TV show Pavitra Rishta. But one change that probably everyone noticed was his transformation from a lanky, slender boy to a ripped, manly body. Now with the trailers of his next flick Shuddh Desi Romance doing the rounds, we take a look at how he made this change so quickly.

Playing the role of the guy-next-door (Manav) in his TV serial, Sushant never really had to focus on his diet or fitness levels. But when he took up the role of a cricket coach in Kai Po Che, he knew it was a tough road ahead. He had to move away from his favourite aaloo and gobhi paranthas that he savoured every morning with butter, to boiled sprouts and vegetables and protein shakes. He also had to give up fried food and sweets. Read how many calories your breakfast has.

Since he found gyms a bit boring, Sushant did a mix of martial arts, horse riding, ballet and playing lawn tennis also. Though he couldn't escape the gym, he restricted it to four days a week and rest of the days were split into practising other things. He learnt quite a rare form of martial arts called Win Phun Kung Fu. Two hours in the morning were dedicated to his fitness everyday.

Being an avid dancer, Sushant believes that his legs are his biggest strength and this came in handy during his marital arts when he had to throw high kicks. But he did have his problem area that being his belly which needed to be toned and ripped in order to have a strong core. Read more about core conditioning.

But by the looks of it, Sushant Singh Rajput has made his mark, not only as an actor with a natural flair but also as a poster boy with a hot body. His good looks teamed with exceptional acting skills is a combo hard to resist. (Who has the best abs in Bollywood?)