Find out how the King of Clay stays in tiptop shape 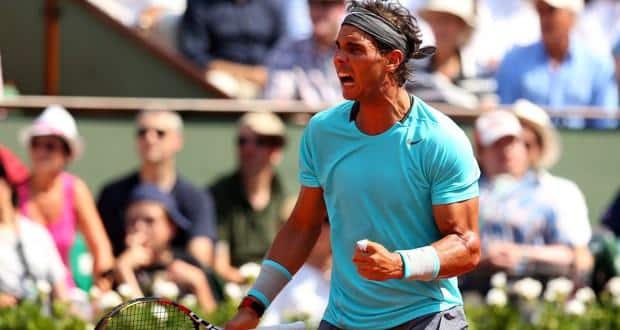 When Rafael Nadal beat Novak Djokovic at the Roland Garros Final in 2014, he won the French Open for an astonishing 9th time which along with five other slams and an Olympic medal (he's the only player to hold that record other than Andre Agassi) makes him one of the greatest tennis players to ever grace the game. Earlier, considered just a clay specialist, Nadal has changed his game to dominate on all surfaces. Here's a peek at his training and diet regime:

Rafa Nadal has always been one of the fittest guys on the tennis court and his training program is designed to get the best out of him on the tennis court. His domination on clay suggests that he has exceptional athleticism because clay is one surface where the slow speed of the ball forces you to cover a lot of ground. That Rafa has an almost flawless record on clay stems from years of hard work and some genetic gifts. After all, he is from a family of athletes, many of whom were professionals in various sports.

Resistance bands to the rescue

Currently, Rafa follows a strict regime which sees him practice tennis for 4 hours a day and hits the gym in the afternoon or evening to work on strength training. Legend has it that Nadal loves resistance bands and their variable resistance gives him a better workout than weights. Also bands work the shoulders and rotator cuff more than dumbbells or barbells which is why they're extremely popular with baseball, tennis and volleyball players.

Rafa has also reiterated that he doesn't like spending too much time in the gym and bands or weights aren't really the reason for his bulging biceps, triceps and forearms and instead calls the tennis court his gym saying that frequently smashing the ball is responsible for his formidable arms. The fact that his left arm is considerably bigger than his right, suggests there's something to this theory.

Hit the core and stretch

He usually follows up resistance bands with a core workout which includes front bends while anchored to the wall by his knees, a variety of push-ups, pull-ups and parallel-bar dips. He ends this routine by doing sit-ups on an exercise ball which is actually more difficult than a traditional sit-up because the back is more arched. He also does a plank with his feet on the medicine ball which go a long way in strengthening his core. The routine usually ends with some catch with the medicine ball while twisting properly to each side to work his muscles so that his body is ready to play shots during a match. Another important aspect of his regime is stretching which is essential for his success on the court. His personal therapist stretches him out every day using different exercises to work different muscles, depending upon the season. So for the grass courts, Nadal focuses more on his lower body because the ball tends to skid more and stay low on grass. Rafa's training regime is unique in the sense that it has very little weight training and the only expensive thing is a vibrating platform. The only other equipments you will find are elastic bands, a chin-up bar and a medicine ball.

Surprisingly Nadal doesn't follow a very strict dietary regime, perhaps because he burns so many calories. He indulges himself often and only before a match or the days leading up to match, he starts eating super healthy like grilled fish served on pasta and veggies. He goes so far to say that he loves chocolates, Nutella and French fries but avoids them close to a match.

In fact, Rafa actually had a dietary war with his tennis rival Novak Djokovic who had become the champion of gluten-free eating. Nadal had described that he was never tempted to succumb to these fad diets. He had said: 'If have the gluten-free diet or have the perfect diet or these kind of things, which are supposed to change you or be a big sacrifice, but mean you are not happy the rest of the day, not being fresh mentally because that's a lot of effort for you, better don't do it. Not all the players who had success had the same diet or had the same style of play. Everybody's different.'

He added: 'Now it seems like the gluten-free diet is great. After three years or four years we will find another thing that will be great, too. Then the gluten-free will not work anymore.'