Mastanamma, 106-year-old chef from India, is a YouTube sensation!

Great grandmother Mastanamma, 106, cooks a variety of yummy delicacies for her YouTube channel. Check out her delicious, healthy recipe videos!

Move over Gordon Ramsay and Sanjeev Kapoor. There is a new 'old' chef that's taking social media by storm with her YouTube channel. 106-year-old chef and great grandmother Mastanamma and her YouTube channel, Country Foods are giving us all the inspiration we need for meal recipes, now that we've grown tired of all the new food trends rainbow-coloured grilled cheese sandwiches, avocado recipes, unicorn-themed drinks, sweet potato toasts, Buddha bowls, protein smoothies and chia seed puddings. It's time to go back to the basics. Mastanamma, 106, is apparently the oldest YouTuber in the world and has over 3 lakh subscribers! Her delicious, rustic recipes include -- watermelon chicken, drumstick curry, mutton biryani, prawns roast, emu egg fry, all served with a side of her warm, toothless smile.

Mastanamma's grandson Laxman Karre and his friend, Srinath Reddy say they were inspired to start Country Foods on YouTube after watching her cook animatedly in the kitchen. They shoot the videos in fields, amidst the backdrop of crops and coconut trees. Mastanamma cooks all her dishes with her basic cooking set up on the ground. She is sometimes assisted by her granddaughter. The videos don t have subtitles, so unless you understand Telugu, you will miss out on some nuggets of information that Mastnamma dishes out every now and then. But the recipes are easy to follow, thanks to Mastanamma's effortless style of cooking. Her recipes are simple, nutritious, cooked with fresh produce and ingredients and are extremely delicious-looking. 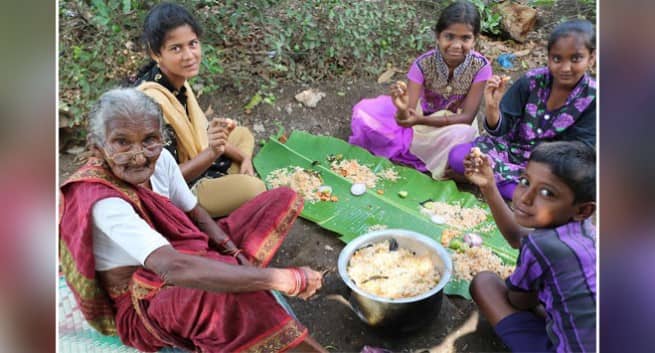 In one of the videos, Mastanamma talks about her life story --being married at 11 and being widowed after the birth of her five children, only four of whom survive. She used to reportedly work as a chef at her son s restaurant when she was younger. 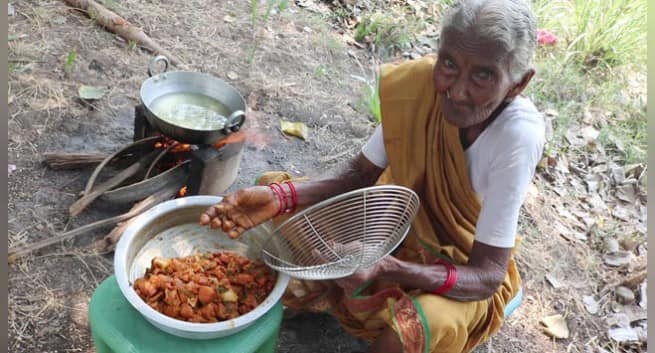 At the end of every video, Mastanamma makes it a point to feed everyone around her and reprimand anyone who doesn't eat enough. Sigh. If only WE could get a taste of Mastnamma s incredible cooking!

Take a look at one of Mastnamma's recipes - fish fry -