She's in a wheelchair and has lost weight. So why can't you?

She lost around 20 kg in three months while being stuck to a wheelchair.

Many of us click on weight loss images mostly out of curiosity! While we want some inspiration to lose weight and are curious about how the person did it, we rarely realise the amount of efforts and discipline the person has put in. Most people who lose weight, exercise for hours together at the gym, lift weights, workout on bulky machines, follow a strict diet and keep at it for a long time. But what happens when your options are limited, you can't move and are bound to a wheelchair. You realise you are gaining weight but what can you do about it?

What keeps you going then? Determination. Virali Modi is one such person. Today at the age of 23, she's a model, actress and motivational speaker. She's lost around 20 kg in the last three years. All this while being bound to a wheelchair.

Virali underwent a spinal cord injury in 2006 and since then has been chair borne. She suffered from malaria that was left untreated, and it resulted in she being paralysed from her neck below. What followed was a series of treatments and therapies that have slowly and steadily helped her gain control over her movements. Today even if she can't walk independently, she has total control over her life.

Two years ago when she realised that she was putting on weight because of the steroids prescribed for her injury, she decided to take control of her weight too. Her weight had reached 75 kg, and she felt an urgent need to lose the excess. 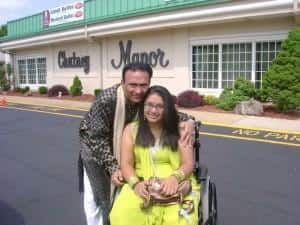 Virali told me that it was comparatively easy for her to lose weight because most of her weight was water weight. When you are bound to a chair and lack strength to move your hands and legs, your options become limited. But that did not stop her. She followed a healthy diet, practiced breathing exercises and yoga and lost 10 to 15 kgs within the first three-four months.

She undergoes physiotherapy for three hours every day. Light weight lifting to tone and strengthen her muscles is an integral part of her therapy. She also practises yoga to help her build a strong core and give her better control over her movements. Read about 12 yoga poses (asanas) for weight loss

The Diet she followed

Virali too like many of us loves junk food. Pizza is one of her favourites. But you can't lose weight if you give in to your cravings. She ate every four hours a day and her diet did not include any white carbs. She had totally shunned out carbohydrates, starch and artificial sugar from her meals. Her day began with a glass of warm water with lemon and honey. An hour later she would drink a glass of raw lauki juice without any sugar or salt. For breakfast, she snacked on dried fruits. Two-three almonds, walnuts, cashews and dates to fulfil her protein requirement. You may like to know about the 10 amazing health benefits of honey-lemon water.

Her lunch consisted of boiled vegetables and dal. In the evening, she would snack on a banana and other fruits. Her dinner would also very light and she mostly had a bowl of soup or fresh salads. Before going to bed, she would drink a glass of milk. Read about Barley water -- your secret weight loss tool. What keeps her going?

She's bound to a wheelchair and her weight keeps on fluctuating. Even though her exercising is consistent, she stopped following a strict diet after losing weight and only avoids eating foods made from rice and wheat. It is often that while dieting one gets bored of eating the same old food. Virali told me that she allows herself a cheat meal once a week. After all, a slice of pizza does no harm. But, she only sticks to that one slice. Self-control and determination to stay healthy is the key, she said. Now, she eats every three hours and everything except dairy products.

Her strength and support

After losing her weight, in 2014 she participated in the Miss Wheelchair India contest. Even though she was a runner-up, her positive attitude towards life won many hearts. She's now a model and an actress and also motivates hundred other people like her to hang in there and look at the positive side of life. Her parents are her pillar of support. From expensive treatments and helping her get back on her feet, she owes all her success to them.

If you want to tell your weight loss or fitness story, participate in our fitness Q&A