How Suriya got his six pack abs for Singam 2

While the actor has played ripped characters before this time he took it to another level. 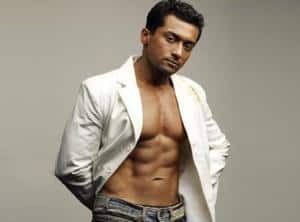 Singam II, the sequel to the 2010 Singam (the Tamil version) was released on July 5 this year and everyone was blown away by Suriya's body in the movie. The Hindi version Main Hu Surya Singham II released on August 2 and will undoubtedly earn him platitudes from the Hindi-speaking audience. The actor has gone from a fit, boy-next-door in his movie Kaaka Kaaka to the absolutely ripped avatar in his later films like Varanam Aayiram, Ghajini (which was also remade in Hindi) and now Singam II.

While his earlier avatars were just as interesting, there is something about Suriya's extra fit and toned body in Singam II that has every boy and man rushing to the gym. For all of you aspiring to get those six pack abs like Suriya, here is what the actor actually did. Trained by Alkhas Joseph, Suriya says he was inspired by Aamir Khan. He says that the versatile Bollywood actor had managed to transform his body completely for his movies and was in awe of his tenaciousness. He also says that he asked for Aamir's inputs on what he should do to beef up. (Also read: Lose belly fat with exercises by Hrithik's trainer Kris Gethin)

It took Suriya six months to get the body he wanted, and admits that it was an uphill battle. ' It is all will power. There is no shortcut. I myself gave up three times and stuck with it the fourth time. You have to really want it,' says the actor.

Trainer Alkhas says that he made Suriya workout for two hours every day. Each day the type of exercise was different but it always contained some form of cardio. 'Working on the abs alone is not enough, one has to workout every part of the body. The abs will follow. There is a lot of core, mixed with aerobics and exercises that focus on the abdominal muscles,' says Suriya.

His training regime consisted of half an hour of cardio and one and a half hours of muscle building exercises like weight training, exercises using dead weights (or the body's own weight) and many more. Some of the exercises that Alkas Joseph had Suriya do were - pull ups, chin ups, 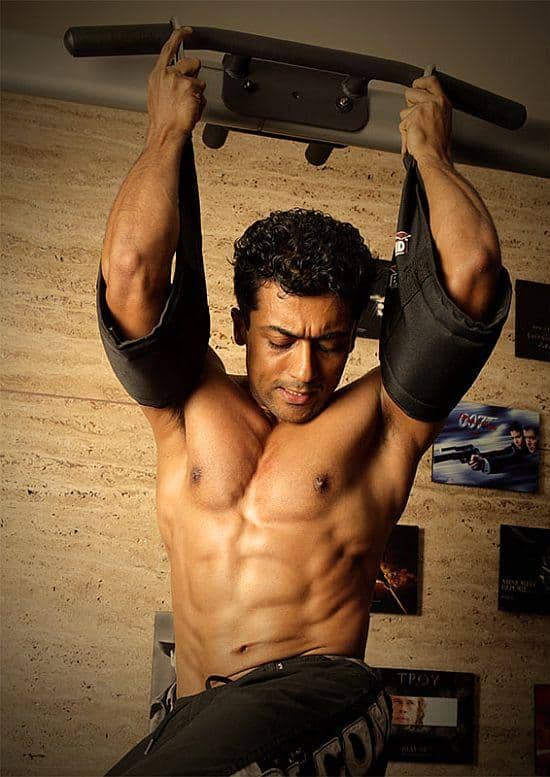 Suriya's tip: While doing cardio, just run for about 30 minutes -- that should be enough. You can get into the other workout schedules after that.'

Suriya says, ' The diet is probably the most important component of the whole regime. Right after working out it is essential to give your muscles that protein they need to repair ripped muscles. There is no point in working out really hard and not sticking to a proper diet.'

He stayed away from oily foods and all milk products. He also cut out salt from his diet.

He had a high protein diet, with egg whites for breakfast, a light healthy snack in the middle followed by lunch that consisted of chicken. Since Suriya's south Indian palate was more used to rice, he used to eat that for lunch and dinner.

The actor says that he made it a point to have a lot of water throughout the day. Since it is one of the best ways to get rid of toxins in the body, that can also lead to bloating and lack of muscle definition.

Suriya's tip: Get a good trainer and dietician if you want to get six pack abs. It is not easy without some guidance. Do not follow any fad diets or what you see others doing. Everyone's body is different and responds differently to exercises and foods. Another important tip is that cutting out salt completely might not be possible but eating food without salt for one day can be achieved.

Stay determined and be natural:

A number of people while training to get six pack abs, do tend to use artificial means to make the process faster and simpler. Things like fat burners and steroids are common. But according the actor stayed away from all that, because he wanted a natural body without harming himself in the process.

Suriya's tip: I was absolutely determined and stayed with the regime. There were times when I used to finish shooting at 2 am and used to still do my cardio and workout after that. So don't give up. Just keep at it and you will see the results.

To get six pack abs it is important to have a body fat percentage of about six to seven percent. With the fat in the body being so low, the muscles start to show. Every one has the muscle it just needs to be seen.

Suriya's tip: A person has to have a low body fat percent to be able to sport six pack abs. Mine was as low as 4.5 percent. It may sound very good, but it is actually really bad for your body. It is not healthy at all. In fact, I suffered from weakened gums due to this. So I would suggest try just remaining fit and healthy.

Finally, he feels, that the strict regime that has to be followed to get his kind of body is good, but not healthy. Moreover it cannot be sustained over a long period of time.

Suriya's tip: Try getting a six pack abs just to know how it feels and looks, but maintaining it over a period of time is a task that many may not be possible for everyone to do. I did it for my character in the film. To have such a body your lifestyle and food habits have to change and that might not always be a good thing.