If the yucky green tea is not your cup for tea, try Typhoo Orange Spicer.

I am a chronic tea sipper at work. In fact, my work station is lined with small boxes containing assorted tea leaves and green tea bags. I find it particularly comforting to sip on the hot beverage first thing in the morning, especially when I am having a rough day at work. So when I was asked to review the Typhoo's Orange Spicer from its range of fruit infusions, I jumped at the chance, even going as far to snatch it from the hands of my colleague who was supposed to review it in the first place. What more could a tea lover want? But here's the main thing; Typhoo's Fruit Infusion range is NOT your run-off-the-mill caffeine-laced tea beverage. In fact, the infusion contains no tea at all!

The UK-based Typhoo is a force to be reckoned with as far as premium tea is concerned. Orange Spicer is one among its range of flavourful fruit infusions, or tisanes as it is called otherwise. The rectangular cardboard packaging is simple and sophisticated with an image of juicy oranges on the box. (That alone would have made me reach for it at a shopping aisle). And a single box contains 25 tea bags weighing 2 gm each. It's a little steeply priced at Rs 250.

It contains apple pomace (residue left after pressing apples for juice or cider), blackberry leaves, cinnamon, citric acid, roasted chicory root, malic acid, hibiscus, orange juice, orange flavouring, orange peel, ginger, rosehips and clove. No sight of good old Camellia sinensis anywhere! And that means no caffeine. This came as a blessing because I used to fuel up on 3-4 cups of black tea every day at work and end up in my bed awake as an owl at night. It was time I broke up with caffeine, and Orange Spicer couldn't have come to me at a more opportune moment. 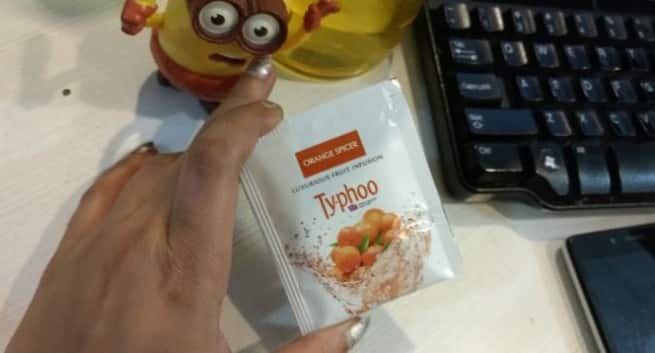 This takes no rocket science. Just boil some water and dip the bags. You can serve them hot or cold!

Most people turn their noses up against green tea because they find the taste unpalatable. Orange Spicer might just be the right replacement for such snobs. If you are a fan of clean citrus-y tastes, this just might be right up your alley. The fresh taste of orange complements beautifully with the woody flavours of cinnamon, ginger and clove. To the expert who came up with the combination, if you are reading this, I tip my hat to you.

Now, I am someone who doesn't leave the tea bag in hot water for too long. I hate being overpowered by a strong herby taste and prefer a light, mellow flavour instead.

Call me stingy, but I hate throwing the tea bag away after a few dips as well. That's where Typhoo Orange Spicer tea bags left me impressed. The bag can be left in the hot cup of water for as long as you want and be rest assured it won't taste like a gross Ayurvedic concoction. Mild or strong, the drink tastes amazing. 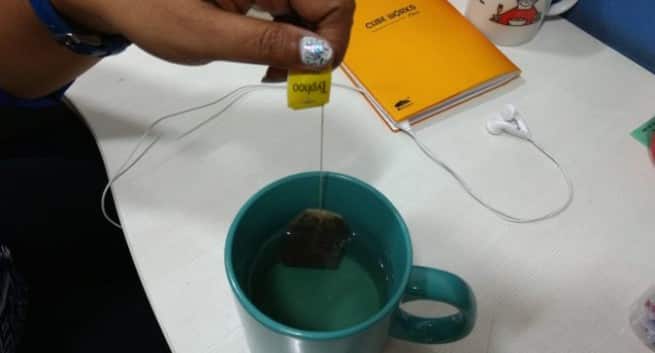 Dipping the tea bag in a hot cup of water[/caption]

I welcome the fact that it contains no caffeine. BUT, I am not too stoked about the added sugar and artificial flavouring. They give the other sincere ingredients like clove, cinnamon, ginger et al. a bad name. I am very sure the drink would have tasted exceptional without the flavourings! Although it not overwhelmingly sweet, I think those on a sugar-free diet should steer clear from it because of the added sugar.

Also, Rs 250 for a box of 25 is a little dear. Treat it like an occasional indulgence rather than guzzling it by the litre every day. But all in all, I am impressed with the fruity drink and wouldn't mind occasionally having a hot mugful on a cold, gloomy monsoon day!