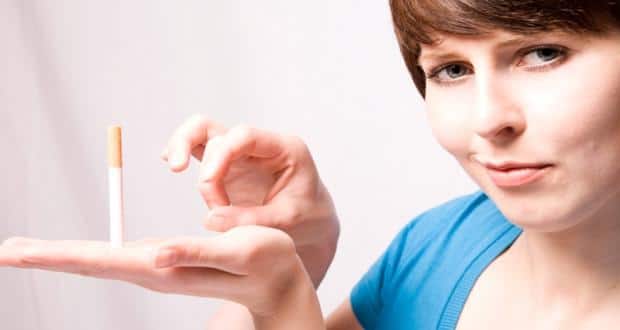 25-year-old Smita was from a conventional Indian family. She followed all the rules and stuck to almost everything that her parents said. But on the inside, she was aching to break free. At her first job, she met a new group of colleagues - women who partied, smoked and let their hair down every once in a while. Wanting to fit in, Smita joined them and sooner than she thought, she was a nicotine addict. Today she smokes a packet a day, and wishes she could quit with every cigarette she has.

According to a study by WHO (World Health Organisation) , there is an increase in the number of women smokers. Women smokers suffer all the consequences of smoking that men do - increased risk of cancer,heart disease along with some others that are uniquely found in women. Here are some of them:

1. Increases risk of infertility: As a woman ages, her fertility does drop a few notches. But in a woman who smokes, the situation is worsened. Doctors say these women may need more than a year to conceive. Studies have found that smoking leads to decreased ovulation, impaired fertilization and implantation of the embryo. It has also been seen that the chemicals in tobacco tend to alter the composition of the cervical fluid, making it toxic to sperm.

2. Decreased the quality of reproductive health: Women who smoke have irregular periods and premature menopause. The chemicals in the cigarettes have a toxic effect on the uterus and ovaries.

3. Increases risk of heart disease in women on oral contraceptives: The chemicals present in a cigarette interfere with the female endocrine system. Since oral contraceptives are synthetic forms of female hormones, cigarette smoke interferes with their functioning. This makes women who smoke more susceptible to heart disease, blood clots and stroke. The probability of suffering from a heart attack is doubled in woman over 35 years of age.

4. Affects the unborn baby: If a woman does manage to get pregnant inspite of the increase chances of infertility and continues smoking when pregnant, the unborn baby gets affected by the chemicals from the cigarette. They are more prone to premature birth, low birth weight. There is also an increased risk for premature rupture of the amniotic sac, placenta previa( a condition where the placenta is placed in an unusual position in the uterus), miscarriage, and neonatal death. It has also been found that new borns whose mothers smoked during pregnancy have the same nicotine levels in their bloodstream as adults who smoke. The child goes through withdrawal symptoms from the first day of its life, just like an adult would.

5. More likely to develop cancer: Women who smoke, are more likely to develop cancer of the cervix (area at the top of the vagina, just below the uterus), breast and vulvar region. In the case of cervical cancer, it was found that the toxins in cigarettes interfere with the working of the cervical cells, making it more difficult for them to curb the growth of cancerous cells. In women who either already suffer from breast cancer, or who have a greater risk of developing the condition -- smoking only hastening the progress of the disease.

6. Heightens the risk of osteoporosis: In the lifetime of a woman, her body extracts calcium from the bones for various functions. As a woman ages, the calcium stores get depleted, leading to low density of the bones. In women who smoke this leeching process is much faster and this causes early onset of osteoporosis and osteoarthritis.

7. Accelerates ageing of the skin: When a person smokes, it leads to oxygen deprivation to numerous parts of the body including the skin. The skin of a woman who smokes loses elasticity, becomes dull and dry. In addition, it is more likely to see wrinkles and other signs of ageing quicker. Crow's feet around the eyes are caused due to scrunching the eyes to avoid the smoke along with the smokers' pout (or wrinkles around the lips), are common occurrences in woman smokers.

8. Affects oral health: Smoking kills the good bacteria in the mouth and increases risk for oral problems. A smoker is also more prone to foul breath. In some cases, rapid loss of bone density coupled with decaying teeth can lead to loss of multiple teeth.

9. Increases risk of atherosclerosis: Smoking increases a person's heart rate multi fold. In women it is no different than men, but it has been found that women are more likely to suffer from atherosclerosis, due to the build-up of plaque and fluctuating blood pressure.

10. Increases risk of diabetes: If you are diabetic, and a smoker, rethink that next cigarette. In women who smoke, weight fluctuation and distribution of fat can lead to Type 2 diabetes. Once diagnosed, smoking makes managing the disease more difficult.