Why it is easier to quit smoking now than ever before

Find out about the new developments in tobacco cessation that'll help you quit smoking. 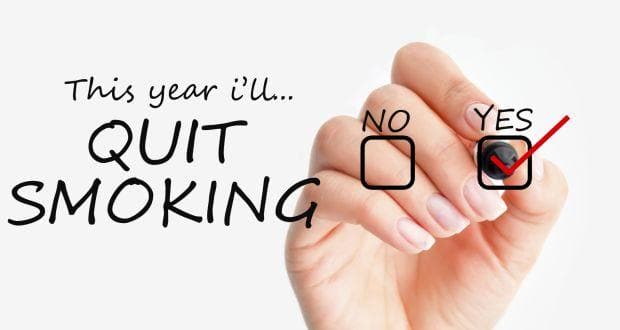 Ask any smoker who has tried to quit and he/she'll tell you how incredibly hard it is. All the motivating factors that inspires a person to quit health hazards, rising cigarette prices, trouble in relationships, etc. seem to just fade away when nicotine craving kicks in and you need to get rid of the dizzy head in order to exist in peace. 'Some of the common excuses people use to not give up smoking include tiredness, fatigue, overnight jobs, stress, loneliness or even taste of a cigarette along with a cup of tea or coffee. Some also believe that it aids in bowel movement.', said Dr Digesh Patel, Head of Tobacco Intervention Initiative (TII) Centre in Kandivali.

However, with increasing awareness and new advances in the field of tobacco cessation, people have managed to accomplish this difficult task. If you are a smoker too, and quitting smoking is one of the resolutions that you've made for the upcoming year, we wish you all the best and give you some information on the developments that have happened in the recent past. Surely, it's easier now than it was years ago.

Here are some statistics related to smoking and smokeless tobacco that'll startle you and tell you how dangerous the menace of tobacco is.

For every anti-smoking awareness campaign that exists, there is a quote by a famous author or a movie scene that glorifies it. However, awareness about the harmful effects of smoking has come a long way. Tobacco advertisements have been banned and unlike alcohol, cigarette brands cannot be advertised using surrogate methods. It was not always so. The 1992 Cricket World Cup was sponsored by Benson & Hedges. The 1996 Cricket World Cup was sponsored by Wills. In fact, Wills was the main sponsor for Indian cricket team for as many as 22 years and some cricketers like Venkatesh Prasad and Nayan Mongia even featured in advertisements for the cigarette brand.

Things are different now. Recently, there was an ad by Cancer Patients Aid Association where a lighter used to light up cigarettes chanted 'Raam Naam Satya Hai ' every time someone used the device to light up. In India, the chant is used when a dead body is carried to its funeral pyre. This reminded people, rather bluntly, that if they were going to smoke, they were going to die.

Another interesting ad by Ogilvy, which collected many awards was the 'Smoking kid' campaign. In it, little kids with cigarettes in their mouth were asked to go up to smoking adults and ask for a light. The adults, shocked and surprised reacted by saying that smoking is bad for you. The kids then asked them, 'if it's bad, then why do you smoke?'. The ad highlighted that people do know smoking is bad, still they do it.

The cigarette packaging has turned less glamorous with graphic warnings, the media criticizes our celebs for smoking in public and movie scenes where a character lights up is accompanied with a statutory warning. Patients who have suffered from mouth, throat and oral cancer are consistently shown so as to scare smokers. The afsos Mukesh bach na saka ad and the sponge ad where they show how much tar a smoker accumulates in a year is shown prior to every movie that gets screened. (Read: Is Kiran Rao right about tobacco ads at the cinemas being useless?)

The campaigns and initiatives by the government are not without their share of hilarity though. For long, cigarette packets contained a doctored image of EPL star John Terry accompanied with a 'smoking kills' message.

Along with the campaigns products too have made an entry into the Indian market, and some people have successfully quit using these products. Here are some of them.

The market for nicotine gums is small but it's growing at a fast rate of 43%. Major brands like Johnson & Johnson and Cipla have come out with nicotine gums that counter a person's craving for tobacco. Even ITC, the manufacturers of most cigarette brands like Navy Cut and Gold Flake has come out with Kwiknic. Priced reasonably, this product is distributed through ITC's already established distribution chain for cigarettes. You may find it at a pan shop near you. (Read: Different ways to quit smoking)

Besides gums, which a lot of people chew too quickly and find unpleasant, brands like Nobacco have come out with lozenges which you have to suck slowly on. According to the Nobacco website, a single lozenge must be sucked on for 10-15 minutes.

The WHO has slammed e-cigarettes as it can constrict blood vessels and lead to coronary heart disease. Also, some youngsters sceptical about smoking try e-cigarettes and ultimately switch to smoking real cigarettes. That said, e-cigarettes are still less harmful as it does not contain tar and other carcinogens that are there in cigarettes. The reason some people prefer it over gums and lozenges is because it mimics the whole process. Smokers are also psychologically addicted to holding something in their hands and emitting smoke. SMOKEFREE is one of the brands that sells e-cigarettes in India. (Read: Could electronic cigarettes save a million lives?)

Quitting smoking is serious business, and in order to support people the Indian Dental Association has partnered with Nicorette to come up with 600 Tobacco Intervention Initiative clinics across the country. Providing counselling in different languages like along with Nicotine Replacement Therapy, this is certainly a great initiative to counter tobacco consumption in the country. You too can access their services by calling the toll-free helpline, 1800 227787. A wide range of people across the country have already benefited from this.

'Most of the patients that walk into the TII Centre are either in their 40s or are young adults. Most of them are males. Among many, one interesting case I came across was that of an automobile engineer who started chewing gutka out of boredom. Since his job demanded him to travel long distances and involved instances where he was largely by himself, loneliness crept in over a period of time. Further, he was in the company of truck drivers and labourers who largely consume or depend on chewing tobacco. As a result, he started taking allegiance to chewing tobacco and it became a daily habit. From one packet, the number increased to 5, and eventually he ended up having 15 to 20 packets a day.', said Dr Digesh Patel, Head of Tobacco Intervention Initiative (TII) Centre in Kandivali.

One patient who had taken up smoking at a young age due to its 'cool' quotient, but ultimately became a regular smoker due to the stress that comes with adult life said, 'Once I visited the TII Centre, Dr. Patel took complete onus of my treatment and for the first few weeks we just had 'talks' and 'conversations' wherein he made me realize the importance of quitting and I strengthened my determination to quit. What followed was a series of motivational sessions, personal counseling and use of NRT therapy as and when required. Today, I am proud to say that I have reduced my tobacco intake by half and am extremely hopeful to lead a tobacco-free life in the coming months.'

These days with the rising use of smartphones, apps have taken the world by storm. Even in the field of tobacco cessation, several apps have appeared which guide and help you in your journey to quit smoking. Here are some of the apps:

These apps can assist you in setting goals, reminding you of triggers, etc. making it easier for you to quit.

Nothing in this world can make you quit smoking if you don't believe in yourself. Tell yourself that you are stronger than the cancer stick, and you'll not let it take control of your life. If quitting smoking is a resolution that you are making this year, we hope that you stick by it. Good luck!