Suffering from a nosebleed? Here are 10 things that could be causing it

Here are 10 reasons you might be suffering from a nose bleed. 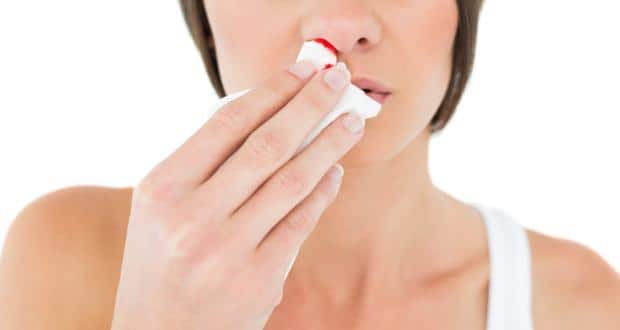 Most of us think that nose bleeding or epistaxis is not something we worry about. And we don't have to. They are quite harmless and making it stop is easy. But what if the bleeding doesn't stop even after 10 minutes of pinching your nose, or worse still, you have frequent nosebleeds? See your doctor then, it might indicate a serious problem.

Why does the nose bleed?

There are tiny blood vessels in our nose which break and bleed even with something as simple as when you pick your nose or when colds irritate the inside of your nose causing you to scratch or rub. So much so, that even blowing your nose very hard can cause your nose to bleed. All of these are common type of nosebleeds called the anterior nosebleeds since the front part of the nose is affected in this case.

Sometimes, however, blood flows from the artery in the deepest part of the nose. This is called posterior nosebleed and this type of complicated nosebleed requires you to see an ENT (ear,nose and throat) specialist because this might have an underlying condition such as high blood pressure, problems with blood clotting or some other disorder.

Here are some basic causes of why you might be suffering from a nose bleed:

Dry air: Nose bleeds are common in dry areas, that is, during dry climate or when you have a central heating system that dries the air inside the house. This causes the tissues inside the nose to dry up and become crusty. Crusting may itch and when you scratch or pick your nose, bleeding occurs. Taking anti-allergic drugs and decongestants also dry out the inner membranes of your nose and cause bleeding.

Colds: In the same way, colds and flu too can cause your nose to bleed. Colds can occur any time of the year but they are most common during winters or during what we call 'season change'. Your nose may bleed when the mucus membrane inside the nose becomes inflamed or cracked, or there is an infection due to cold, or you blow your nose too often. Even repeated sneezing can cause the tiny blood vessels to rupture.

Allergic rhinitis: Allergic rhinitis are a group of symptoms that affect the nose, that is, when you inhale something you are allergic to, for example, dust, pollen, dander, or even certain foods. Early symptoms of allergic rhinitis include itchy nose, skin, throat, and eyes; sneezing, watery eyes, runny nose which later develops into stuffy nose. Researchers at University of British Columbia, Canada, found that allergic rhinitis is associated with recurrent nosebleeds in children. These nosebleeds occur due to nasal symptoms plus blood clotting disorders, they suggest.

Barotrauma: When you are flying or driving up the mountains, you may have noticed how your ears starts 'blocking'. This discomfort is because of difference of pressure between the inside and outside of the ear and is called barotrauma. So, what does this have to do with nosebleeds? Well, if you have a congested nose from allergies, colds, pharyngitis, laryngitis, or other upper respiratory infections, you are more likely to develop barotrauma and hence the nosebleeds. Barotrauma can also occur if you have a swelling in the throat, or if you have congenital blockage of Eustachian tube (connecting the middle ear to the back of the nose and upper throat).

Injury: Injuries caused during a fall, motor accident or a punch in the nose may make your nose bleed. It may indicate a broken nose, skull fracture or internal bleeding. You must see a doctor if your nose starts bleeding after an injury.

Juvenile angiofibroma: This is a benign (non-cancerous) tumor occurring in the back of the nose or upper throat. It's a rare type of disorder occurring exclusively in boys aged 7 to 19. The symptoms include frequent and prolonged nose bleeds, easy bruising in nose, difficulty breathing through nose, bloody nasal discharge, and loss of hearing. Surgery may be required if the tumor grows large enough and blocks one's airways.

Hereditary haemorrhagic telangiectasia: Also called the Osler-Weber-Rendu syndrome, the condition is an inherited disorder in which abnormal blood vessels develop across several areas in the body such as brain, lungs, liver, intestines, etc. When this type of blood vessels develop on the skin it is called telangiectasia. Frequent nose bleeds in children is one of the main symptoms of this syndrome. Other symptoms include port-wine stain (birthmark) and shortness of breath.

Heavy alcohol use: Heavy drinkers are also not safe from nosebleeds. Researchers have found that regular consumption of alcohol interferes with the activity of blood platelets (responsible for blood clotting) thus prolonging the bleeding time. Moreover, heavy alcohol use dilates the blood vessels causing change in blood pressure and making the blood vessels prone to injury. These findings made the researchers to conclude that alcohol is definitely one of the causal factors for epistaxis.

Certain medication:Blood thinners and NSAIDs (non-steroidal anti-inflammatory drugs) such as warfarin, aspirin, and ibuprofen may interfere with blood clotting and sometimes cause nose bleeding. Overuse of decongestant nasal sprays have also known to cause epistaxis. Certain alternative medicines and dietary supplements too can cause nosebleeds. Examples are ginkgo, ginseng, feverfew, garlic, ginger, vitamin E, and others.

Last but not the least, some medical conditions such as kidney failure, liver disease, thrombocytopenia, haemophilia and other hereditary bleeding disorders too can cause nosebleeds. So, don't ignore nosebleeds if they are frequent, persistent and can't be controlled by first-aid measures, or if you have foul smelling nasal discharge. Check with your doctor.

How to stop a nose bleed:

If you notice you are suffering from a nose bleed, sit or stand so that your head is above your heart. Then, tilt your head forward and pinch your nostrils just below the center part of your nose. A steady pressure for about 10 minutes will stop the blood flow. Just remember not to tilt your head back, or this might cause the blood to run into your throat. Also, remember not to strain yourself immediately after your nosebleed stops and don't blow your nose for the next 24 hours. This might cause bleeding again.