Organ donation - all your queries answered 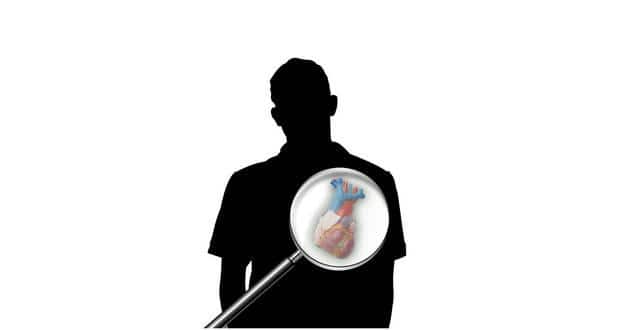 Recently, a family was in the news after 'volunteering' to donate their brain-dead son's organs in Delhi. The doctors at AIIMS worked for 10 hours to harvest 32 different organs. The family's decision to do this stemmed from a desire to 'see their son in as many people as possible' benefiting atleast 34 people.

This heartwarming story helps create more awareness among people dispelling some of the myths that they usually harbour around the procedure. In this post, we try and help educate about organ donation - how it is done, who can donate, when should it be done, how to pledge your organs etc. While there are two different types - living organ donation and cadaver donations, we are discussing cadaver donations in this post.

Organs from patients who are brain dead are called cadaver donations. Organs which can be harvested include heart, eye, liver, lungs, kidneys, etc. Brain death usually occurs six to ten minutes after cardiac arrest and the person can be kept on ventilator support (so all other bodily functions are running) till the organs can be retrieved. Incidentally, brain death is an irreversible end of all brain activity and different from a coma or vegetative state.

It is estimated that around 200,000 kidneys and 100,000 livers are needed every year in India and only about 2-3% get it. By conservative estimates about 90,000 Indians die in road accidents every year and 40% of those people are left 'brain dead'. Dr Sunil Shroff of the MOHAN foundation estimates that 50% of all organ donation needs could be met by simply using organs from road accident casualties.

Sadly there's a distinct lack of awareness about organ donation. Think about it yourself, if your loved one has just passed away how receptive would you be to a procedure like organ donation? The only way to improve this scenario is by educating people about organ donation and putting in place an easymechanism which will allow people to donate their organs upon death.

To donate or not to donate?

Various organisations like MOHAN (Multiple Organ Harvesting Aid Network) and the ZTCC, Mumbai (Zonal Transplant Coordination Centre) are working to increase awareness among the common man. One way to do this is by having driving licenses to double up as donor cards, a practice that's followed in various Western countries. The Central Government is currently working on a new draft of the Human Organ Rules 2012 in which the health ministry has suggested that all people applying for driving licenses be asked whether they're willing to donate their organs upon death or not. This belief is echoed by Dr Ashwin Mallya, a surgeon from Sir Ganga Ram Hospital, New Delhi who feels that since most cadaver donors are deaths from road accidents having their assent on their driving licenses would go a long way in fulfilling organ demands.

Another issue is the lack of facilities; there are only 120 centres all over India which are deemed capable of organ transplant. One way to counter this would be to follow the Maha govt's recent move to increase organ donation. This move has made it compulsory for all non-transplant hospitals equipped with an ICU and operation theatre' to retrieve organs for harvesting and made it mandatory for them to officially identify brain dead patients. This would allow hospitals which don't have organ transplant facilities to at least harvest organs from brain dead patients for use by the facilities which can at least increase the availability of organs.

Another major hurdle in India is the superstition attached to death and reincarnation in India. Many people believe in afterlife and feel that organ donation could lead to the body not being 'whole'. The only way to counter this is to raise the level of awareness about organ donation. It's important to note that none of the world's major religions Judaism, Christianity, Hinduism, Islam are opposed to organ donation and in fact consider it to be a deeply altruistic gesture.

Two recommendations that have been made include following the Spanish model of recovering all brain dead patients' organs and the Singaporean model which looks to legalise the sale of organs. However, both initiatives are seen as too radical in India. The latter would in fact bolster the already rampant organ trade feels Dr Mallya. "It would be better to increase media involvement and target youngster, who'd be more receptive to the idea," he adds.

Where can I donate my organs? 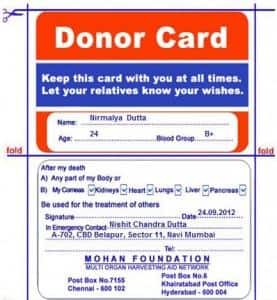 The most common and least hassle-free option is to print a donor card. Many NGOs have the option to simply print an organ donor card in which it's explicitly written which organs you'd like to donate. At least until driving licenses start doubling up as donor cards this remains the best option to ensure that your organs are donated. Click here to download the MOHAN foundation's donor card.

It's very easy to make and takes barely one minute of your time. It's also important to let your near and dear ones know, that you're open to organ donation so that they can inform the concerned authorities during the time of a mishap. Pledge your organs today and you can save lives too!