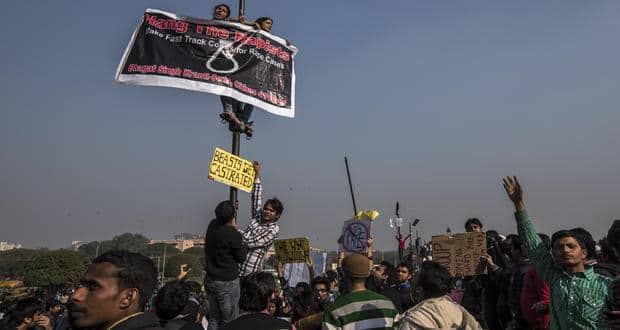 A dimly-lit or dark room, a yelping woman, a callous villain and a hero who saves the helpless victim. Bollywood of the 1950s to 1980s almost had a set rape 'formula'. Fortunately, this has diminished on the silver screen, but sadly, rapes are on the rise off-screen. India witnessed a staggering spiral of 873 percent in rape cases between 1953 and 2011, according to statistics compiled by the National Crime Records Bureau.

Is Bollywood to be blamed? 'Blaming cinema for influencing young minds is not a fair assumption,' says film historian S.M.M. Ausaja. 'Yes, the youth forms a major fraction of the cinema-going public, but every entrant in the theatre is aware of the film's make-believe nature. Today's generation is more educated, less gullible and doesn't fall prey to fiction,' Ausaja told IANS. Rewind over two decades into the film world - from Pran to Prem Chopra, from Shakti Kapoor to Ranjeet, the arch villains of the bygone era played rapists over and over again. Sometimes as a revenge tool and sometimes as a mark of men's superiority over the fairer sex - whatever it was, rape unabashedly featured in film scripts.

Mehboob Khan's 'Amar', B.R. Chopra's 'Insaaf ka Tarazu', N.N.Sippy's 'Ghar' and Rajkumar Santoshi's 'Damini' are some examples. But change ensued. Today's cinema doesn't have rape scenes per se, but many have blamed double entendre lyrics in sleazy item numbers like 'Munni badnaam' and 'Sheila ki jawani', uninhibited skin shows and lovemaking on the big screen as aggravators of increased sexual violence against women in real life. The brutal gang rape of a Delhi girl in December 2012 triggered off a national debate over the portrayal of women in popular cinema and TV, and its impact on the general public. However, showbiz singularly cannot be blamed for the rise in crimes against women, noted Samir Parikh, director, Mental Health and Behavioural Sciences, Fortis Healthcare.

'No one parameter can be blamed for the rise in any crime. But it is scientifically proven that watching aggression increases the tendency of aggression. Similarly, even if there are too many rape scenes in movies, the objectification of women itself can impact minds. If you promote that, it will have its impact,' Parekh told IANS.

The need of the hour, then, is perhaps, as veteran actress and social activist Shabana Azmi once put it, that our heroines 'make more discerning choices'. 'Crass lyrics, voyeuristic camera angles, fragmented images of heaving breasts, swivelling navels, swinging hips rob women of autonomy. So much easier to blame than to reflect and share part of the blame. All sections of society including films need to analyse how we are part culpable,' Shabana posted on Twitter.

But that, to no effect so far - except the fact that rape scenes are now abysmally low on the big screen. Reasons Ausaja: 'It has vanished because a new generation has arrived which doesn't have cinema as an avenue for titillation, there are other far superior means. Rape in the 1970s and the 1980s unfortunately was used more for its 'item' value than as a necessity of the script. 'There was no internet, no access to porn and no open sale of desi Playboys, and the families were largely conservative. Today's generation has access to myriad forms of nudity, and they won't watch a film just because of some skin show in it,' he added.

To some extent films may impact people's psyche, but at the same time Parekh feels there are othre important factors that can't be ignored in perpetuating sexual violence. 'Like how people here just stand by and let things happen; the law and order of our country; the society - all crimes are a result of collective factors,' he added. Perhaps then a vivid display of the consequences of rape can help in reducing such crime, once said psychologist Neha Patel. 'When films show rape scenes, they often focus on the suffering of the girl instead of showing the consequences borne by the man. If this is shown, it might inculcate a feeling of fear in men,' she said and added: 'We have seen how ads send out subtle messages.'