Cancer claimed some of her organs for sure but not her spirits. 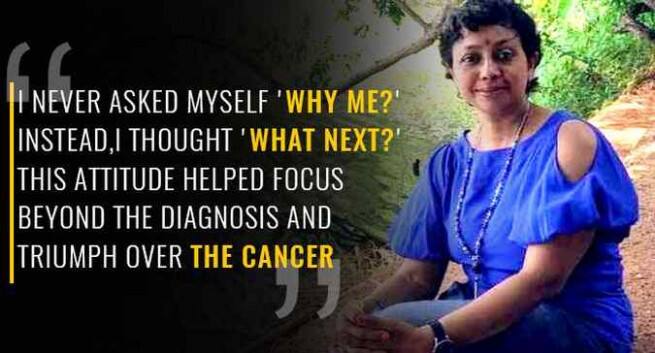 Rashmi Mehra Kumar is a personification of Smile With Rashmi, the title of her own Facebook page. When you see that jovial smile it is hard to believe that she is a cancer survivor. But then she tells me that it is her cancer that has changed her, evolved her to be the person she is today. She is now a certified life coach and motivational speaker and a happy mother of two. Also Read - Women and dental health: Looking after your teeth through the years

Also Read - Real life story: Vijay Nallawala talks to us about the highs and lows of bipolar disorder and how he triumphed over it

Rewinding her life a year back, her story was entirely different. Belonging to the corporate bandwagon, she worked with leading financial organisations like Kotak, Birla and Reliance. Life was all merry with the mundane struggle of maintaining a work-life balance which wears everyone out. Also Read - This woman went on a raw diet for 123 days and the results are stunning

On the 1st of January 2016, Rashmi sent out a little prayer to the universe, This year just make me happy. But before happiness could engulf her some nagging womanly woes were vying for her attention irregular monthly cycle, feeling of heaviness after meals and a tremendous backache, especially after work in the evening. Though deceiving in nature, I couldn t ignore these symptoms for too long. It was like my body was calling out for help. It was giving signals saying pay attention, she says. She visited her gynaecologist Sudha Marwah who assured hormonal pills could settle the cycles and she would be okay in a day or two. But the back ache was worrying her and she wanted to do a sonography. Why sonography? asked her doctor and she replied, ‘because I want to.’

While waiting for the reports something within her moved, Rashmi started to meditate. I started connecting deeper with self. I started feeling a kind of strength that empowered me. Something that was preparing me to endure something, she says. Then came in the reports which said there was a mass in the ovary which needed further evaluation. A chest X-ray, a blood test and MRI later, it was confirmed ovarian cancer. The doctor suggested complete removal of ovaries and some organs around it, in medical terms Complete Hysterectomy. Yes, there was fear, there were tears, but the matter of fact was simple — she had to fight a demon within.

The C-word can cripple the best of optimists among us and it did the same to Rashmi too. There was a rustle of emotions and then slowly these emotions settled within me. Instead of asking myself, Why me? I asked myself, What next? This question gave me clarity of thoughts. I started planning for my life ahead to get in touch with a good oncologist, getting my life set during the treatment, what I would do post the treatment and how to break the news to my family and my children. Doing what was necessary and need of the hour kept me focussed and stopped me from sweating over my diagnosis, she says with that jovial smile.

Of course, she was not alone in her fight, her husband stood by her as a pillar of strength, Together we decided to look ahead and not allow our minds to wander or any doubt or negativity to get to us, she says. Five to six days post the diagnosis they met the oncologist. I had faith in my doctor and knew that I was in safe hands. My surgery was to take place on 19th January 2016. Once things were settled we had this tough job to break the news to the children. I would say we sailed smooth here, too.

To my son, we gave him cricketer Yuvraj Singh s autobiography The Test of My Life: From Cricket to Cancer to read. He is a cricket buff and a Yuvraj Singh fan. Once he read it, we told him that mum too has cancer and needs treatment. My son was of the opinion that like him I too should go abroad and get treated. But I explained to him that mine is a different kind of cancer and moreover I need to be around him and his little sister. But he wasn t too convinced. When one of my reports went to Mayo Clinic for opinion and I showed it to him, his little mind did calm a bit and he asked if I am sure I would be good. To which I gave a positive reply. Next, my little man behaved all mature being the kind of support I could have only imagined. My daughter was too small to know what was happening but I still told her mum is unwell and she needs treatment. I must give it to her that she braved the entire episode well at her age, says Rashmi.

…And the fight begins 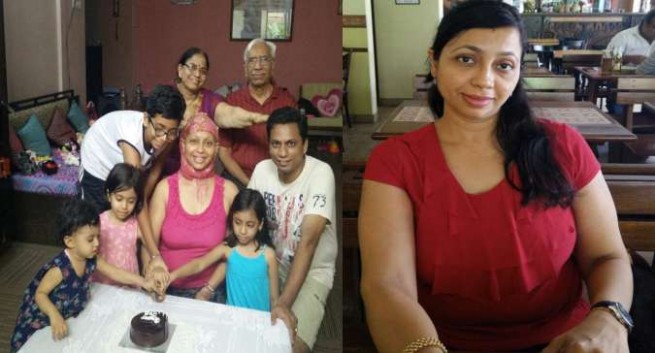 Treatment for cancer is not a straightforward approach. It includes surgery, chemotherapy and other supportive therapies for one to triumph over it. On 18th January 2016, Rashmi went to the OT for the surgery. While the operation took some eight or nine hours, it needed ten days of hospitalisation. More than the surgery the hospitalisation bit was tough. I had never been away from my kids that long. All I wanted was to get back on my feet soon and be around them. When I came to my senses, I could feel three drain tubes attached to me that needed constant monitoring. Yes, my body was in too much discomfort after the surgery, says Rashmi, who celebrated her 40th birthday in the ICU.

Her cycles of chemotherapy started a month after the surgery. I was advised to go for six chemo sessions every 21 days. My medical oncologist did tell me about the side effects of chemo and also assured that a positive attitude could help we wade through it. I took his words to heart and that might be one of the reasons why I suffered very minimal side-effects of chemotherapy, she says. One of the side effects of chemo is hair fall and Rashmi took care of that too. Before my second chemotherapy session, I shaved my hair and a very dear friend of mine had sent a wigmaker who made a wig out of my hair. I wore it with some colourful scarf.

But chemo is not just about hair loss it is a debilitating phase of the treatment which makes one weaker and sicker than ever. I chose to do my chemotherapies on Thursdays. On Fridays, I had to take an injectable dose which would make me frail and the weekends were for total rest to recuperate. On Mondays, I would be back in my element. This routine made sure that my family didn t have to spare the weekdays taking care of me, she says. But there was more in store. After the fifth cycle of chemo, I started losing control of my left hand and there used to be a shooting pain in my legs. When I consulted my doctor, he said this is neuropathy damage occurring in hands and feet due to the side effects of intensive chemotherapy medicine. However, my doctor assured that these things could be reversed later, she says.

Family means the world to me 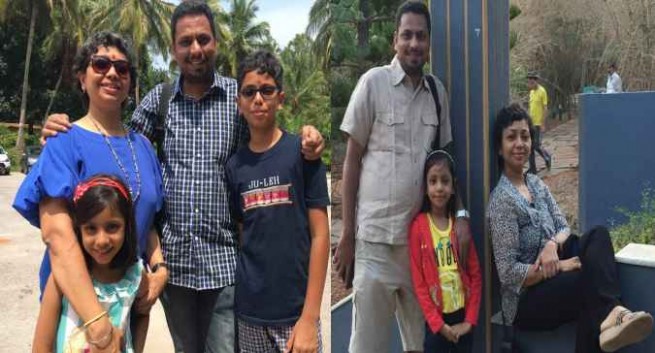 My fight was not just mine; my entire family came forward to support. Apart from my husband and kids, my father-in-law moved from Delhi to Mumbai for five months and my mum and mother-in-law took turns to be by my side during the hospitalisation and chemo sessions. Initially, it was difficult for my mother to come to terms with my diagnosis, but as she saw me take up the fight with all might, I could see she grew strong, her teary eyes were filled with affection and strength. My dad who has always been my inspiration and support stood by my side like a rock. He taught me to be brave and honest at every point in my life and probably that attitude during these trying days gave me the courage to look beyond the cancer. My sister used to leave her six-year-old daughter behind to attend me during my chemo sessions. There were times at home when my son used to constantly check on me Mom do you need a massage? Mum, are you doing well? My daughter showered me with lots of kisses and hugs with a support of that kind it was not justified to me, in fact, to crib over my situation. Their love helped my healing progress. Many well-meaning relatives came forward to help, who also offered to keep my kids with them. But I refused, this was their crisis too and I wanted them to face it head-on. I never pushed them away, they had questions and I always answered them whether it was regarding the drips, the chemo or my failing health. My kids were on the same page with us when it came to facing the challenge, says this brave mother. I was lucky enough to have a set of friends who always took care of me a very close friend of mine used to get soup for me for five months.

Putting the pieces together 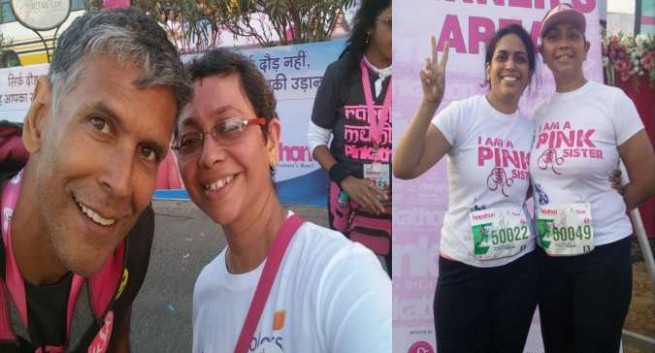 The recovery process needed some strong dedication too. Positive attitude, proper diet and exercise were the foundations for resurrecting me. I started yoga and physical training to reverse the neuropathy effect of chemotherapy. Initially, it was tough for me to even walk 100 meters. But I never gave up, my kids and my family always inspired me to keep trying. After that, I ran my first marathon with my sister in the month on November 2016 5km Pinkathon. It took me 2- 3 months to run, but post that there is no looking back. Till now I ran three marathons 5 km each and a 10 km Thane marathon, says Rashmi with pride.

Sometimes life gives you lessons that aren t to be just learned but shared and that is what happened to Rashmi. A few days after I recovered and was able to get back on my feet my doctor asked me to talk to a woman who was diagnosed with the same type of cancer. I spoke to her and she was motivated enough to go through the treatment. One thing led to another and soon I was talking with many people who thought that this diagnosis was the end of their life. Motivating others and helping them look beyond cancer gave me a purpose in my life. I went ahead and did a professional course to become a motivational speaker and life coach, says Rashmi.

Today more than a year of being cancer free, Rashmi shares the wisdom of her fight with cancer with people who are in need and lights a ray of hope in the heart of patients who are struggling to find hope post their diagnosis. 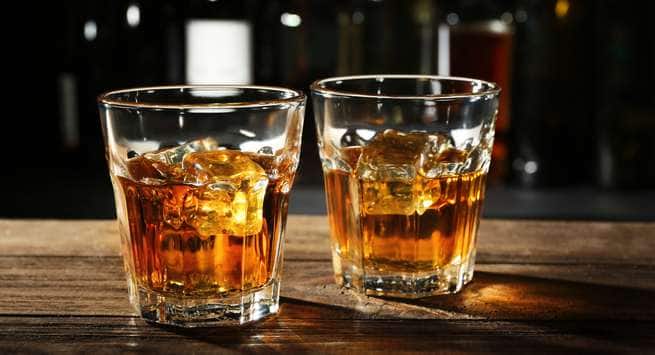 Even moderate consumption of alcohol can risk your mental health 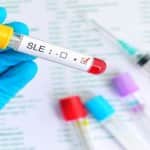